Blast from the Past - Turkey Buzzard Review

The Turkey Buzzard Review was a little magazine I published with the help of Joanne Kyger, Diana McQuaid, my then spouse and brilliant artist Terry Bell and so many others, beginning in 1977. Here is an account of that first publication by Kevin Opstedal in his

This first issue, ''lovingly dedicated to Lew Welch wherever he may fly'', was edited by Dotty le Mieux, assisted by Sara Schrom, Joanne Kyger, Susanna Acevedo, Charles Berrard, Terry Bell, Diana McQuaid, and Michael Rafferty. It was a group effort. The magazine featured works by Bill Berkson, Lawrence Kearney, Aram Saroyan, Joanne Kyger, John Thorpe, Michael Wolfe, Nancy Whitefield, with a collaboration written by Tom Clark and Lewis MacAdams, photographs by Susanna Acevedo, a painting by Lynn O'Hare, and drawings and cartoons by Gordon Baldwin, Terry Bell, Lynn Phillips and Ted Saladin. Inset among its 24 pages were excerpts from various sources related to turkey buzzards and vultures. The theme set by the Welch poem was carried through the magazine. Joanne Kyger said ''It was much fun and a group effort. We did have a hilarious theater event presenting 'Woodrat and Gopher visit Tibet', which was a benefit for the second Turkey Buzzard I think. Phoebe got ga-ga and kept kneeling at Lewis' feet, Sara fell over a bench before it was her turn to read, Nancy Whitefield's beanbag chair caught fire, etc, etc. It was a total participatory event, in which the audience acted out as much as the readers- actors.''
The Turkey Buzzard Review ran from 1977 to 1981 and produced only four issues, but it was a classic, eclectic little Bolinas magazine. 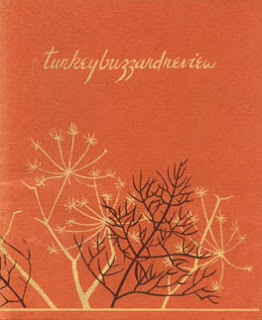 Posted by asixtiesgirl at 10:31 AM