This one was born in the 1970's when I lived in a small never to be named (at least in those days) town on the California Coast. It was filled with characters. One-Eyed Pete was one of them, although his name was not Pete and he had two perfectly good eyes.

This one appeared this month in the Mill Valley Literary Review edited by John Macon King. Thanks John! 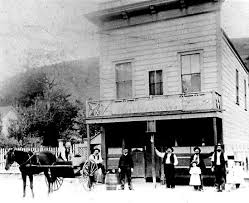 From his Place under the Overhang in the Doorway of Smiley’s Schooner Saloon,

One-Eye Pete Squints out at the Rain

Says —
Look at the sky Man
It’s the new moon and the eclipse and something’s
flashing a light up there too
Look, there it goes again, it’s the spacemen
They’ve landed on Mt. Tamalpais

Me thinking — Old One-Eye sees more than the rest of us
with our two good eyes, secretly envy his talent

Thinking— He sees inside my head while dreaming; we dream
in tandem

Ed’s behind the bar, waiting for Nairobi Steve
to take over at seven o’clock

I’m drinking coffee with Hennessey in the doorway
with One-Eye, when this raindrop comes off the beam
over my head and lands in my drink

It’s the spacemen! They’ve landed in your drink.
See that? See that?

Flashing there, a sparkle of reflected light

Big Carl shakes his big head — Nah, it’s an electrical wire in the trees
It’s got a short or something

One-Eye comes away from the doorway, big grin on his face —
Ain’t those spacemen something though?
Something - I say, my coffee gone cold in its cup

Big Carl doesn’t say anything; Ed pours another drink; on TV girls
in short skirts whirl their way across the frozen screen

I toss the coffee to the ground, as a winking light sparks out of it
and flits away. Pete nods, shuffles, closes the door, shutting the night
with its secrets outside.

by Dotty LeMieux
Posted by asixtiesgirl at 3:15 PM